Jane Zusters is a teller of stories, often veiled in metaphor and camouflaged with ambiguities, but always deriving from her own relationships with people, places and events. 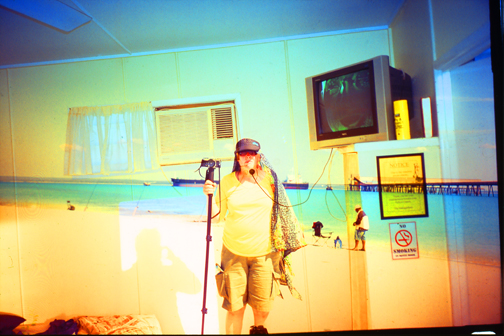 In the 80s a need to communicate more with paint than abstract theory and purely aesthetic values motivated the Italian artists of the Transavante-gardia. (1) Zusters was initially exposed to these postmodern, Neo-Expressionist works during her first visit to Italy in 1984. The vital manner in which they portrayed personal concerns about the human condition has remained an important influence on her own practice. Traces of Cubism, Expressionism, and Surrealism float to the surface in the Transavante-gardists’ melting pot, along with elements from Renaissance art and classical antiquity. Like the Transavante-gardia, Zusters’ work references the continuum of western culture, the accumulative layering of generations over centuries and the constant process of adaption and revision of the past to meet the needs of today.

The symbol of a small rowboat with its connotation of journeys and rites of passage is one of Zusters’ frequently used motifs. She has drawn, painted, scraffittied, photographed, collaged and constructed boats for nearly three decades. Like the clinker dinghy in her painting Vada Italia, her winning entry in the 1984 Montana Art Award, they represent physical as well as intellectual or spiritual journeys. The title, the Italian translation of ‘Italy I am Going’, proved to be prophetic when Zusters used the prize money to finance her first trip to Italy. The experience was transforming, opening her eyes to the past and empowering her with the means to express her vision with contemporary originality.

Her painting Renaissance Refuge won the Tokoroa Art Award in 1988, enabling her to revisit Italy and visit Etruscian tombs and Giotto’s fresco cycle of the life of Saint Francis of Assisi. (2) An exhibition of contemporary Italian art proved to be revelatory. Mimmo Paladino’s success in ‘establishing connections between disparate elements’ (3) a modernist, colour field painting combined with a primitive face on an oval shaped painting and an iron cart covered with small bronze busts provided confirmation for Zusters’ own recent experiments.

Once back in her Waiheke Island studio she began following the example of the Transavante-gardists. She had tentatively been adding painted images cut out of plywood to the surface of her canvasses and now felt encouraged to combine photographs and other material liberating her work from the confines of the flat-framed rectangle.

Taking Giotto as her model, she sought to convey personal narratives within her contemporary art practice, using elements of the past as tools for the present. The construction paintings of canvas, acrylic and plywood in the late ’80s developed in the ’90s into luminous oils which were often painted on rimu ovals, headboards or combined with timber found objects.

Her responses to the wider western cultural heritage have always been mediated as a twentieth century artist from the other side of the world. By the late 1990s Zusters was drawing the majority of her subject matter from visual memories of life in the Southern Hemisphere. Cook’s Observed Latitude (Black and Blue Art Cross, 1999) conveys notions of distance in time and space. The dark ovals within the arms of a ‘Southern Cross’ suggest separated worlds divided by vast oceans alluding to cultural as much as physical disconnection of the post-colonial.

Zusters encoded abstracting imbues her art with an intriguing, enigmatic quality. The works revealing meaning over time, provoking reflection and personal interpretation of the images.

Jane Zusters was born in Christchurch, New Zealand, in 1951. In 1973 she finished a BA in English and was working as a teacher at Navua High School in Fiji, when she decided to be an artist instead. She has spent her adult life painting and taking photographs. She studied at the Canterbury University School of Fine Arts for two years and in 1975, while still a second year painting student, exhibited her photographs in the “Six Women Artists” show curated by Allie Eagle at the McDougall Art Gallery in Christchurch, NZ. In 1978 she was awarded a major Queen Elizabeth II Arts Council Grant and moved to Auckland. In 2003 Jane completed an MFA (First Class Honours) in photography at Whitecliffe College of Art and Design.

Highlights for Jane have been winning first prize in the Montana Art Award 1984, another Arts Council Grant in 1986, winning first prize in the Tokoroa Art Award in 1988 and being a joint winner of the Lilian Ida Smith Award in 1994. Important experiences for Jane have been visiting Italy in 1984 and again in 1988, being the Rita Angus Art Trust artist in residence in 1991, and visiting Berlin on a Goethe Institute Scholarship in 1992. In 1986 she had a studio home built on Waiheke Island and she has done much voyaging from there since. In 1999-2000 she lived in London for 10 months. At present she is living in Christchurch.

Jane Zusters is an experienced art tutor who has facilitated numerous painting workshops, including classes at Artstation, Auckland University Extension Studies, E.I.T. Taradale Hawkes Bay and Wanganui Polytechnic. She was a guest artist in residence at Canterbury University in 1995. In 2004 she was the William Hodges Fellow in Southland.

Jane Zusters is a painter and photographer who has recently moved into the areas of installation and DVD. In 2001 her art practice underwent a fundamental change when she was invited by Miranda Playfair to be part of Xerart, artists explore digital technology at the ASA gallery in Auckland. The ensuring exhibition ‘Stratum’ comprised work by Billy Apple, Carole Shepheard, Martin Ball, Harvey Benge, Stephen Lovett, Miranda Playfair (working as Girlie Pics) and Jane Zusters. Her show at Te tuhi – the mark in 2004 comprised found objects, painting and DVD. In 2004 she was the William Hodges fellow in Southland. Zusters most recent exhibition was at Pataka in 2005 and used the device of creating a 70s lounge to look at albums of photographs shown in conjunction with a continuously looped 20 min DVD.
. Zusters” work mediates the personal and the intimate and the environment and the local. She articulates relationships between nature and culture. Her work explores some of the central issues of our time namely that uneasy edge ecologically where natural worlds are threatened when human beings channel the whole eco system into themselves. Her video works juxtapose the manmade with the natural world often figuring birds and water. She is passionate about our endangered New Zealand birds and water issues and co founded Artists for save our Water which initiates art projects that draw attention to local water issues. Her practice manifests itself in various forms including painting, photography, installation involving found objects and short continuously looped video pieces. Zusters is represented in major public collections in New Zealand. After twenty years coming and going from her studio house on Waiheke Island, she returned to live and work in Christchurch in 2005.

Recent Solo Exhibitions Jane Zusters has had 45 solo exhibitions and the most recent being:

2012   Forrester Gallery, Oamaru, Where the home is

2010     Quikcorp Gallery Christchurch, The return of the moa

2002 Auckland, MFA exhibition, Where did you go to my Lovely…

2012     PaperGraphica, Christchurch, Where the home is

“I have spent my life as an art voyager, refusing to be confined by one medium or a signature style.”