elegy for my studio

I loved my studio at 84 Lichfield St. I was lucky enough to score it in 2008 when my friend Tiffany Thornley told me Anne-Marie Jean was leaving. It was like my old studio in Ponsonby from many years ago but at a Christchurch price I could afford. The High Street Project was next door on the same floor. I shared about 2000 square feet with Norbert who was retiring from being a display artist and Karen Giles, a passionate painter of water and islands. It took me 35 minutes to walk there from my home in Linwood and the bus terminal was opposite if I bused. After 12am on Saturday the parking was free so I used to take my car in with materials. In this composite photograph you can see the work Crown I did for the Academy of Fine Arts Artists as Activists exhibition last year. I liked being able to work on the floor and walls at the same time and I loved the scale of the work I was able to do here. Painting big really is exciting. When I was painting at home I could only do one picture at a time and the paint took forever to dry so I loved the expansion of my process possible in this space.

After the 20th September Earthquake our building was red- stickered and we were out of it for some months as the glass in the skylights fell into the stairs. Karen and i were so happy to be back. I had just done a complete tidy up and buy up of materials and started on my next projects. I am really sad about loosing my brushes as I had some fantastic Spanish filberts I bought in London eleven years ago for about 5 pounds each and these are utterly irreplaceable as is my special kit of etching burins for scrafitto. The paint just flowed out of my filbert brushes and they just got better and better with age. Gradually Norbert was disposing of 10 years of prop making and Karen and I were expanding and we had just made half the studio into an exhibition space. Norbert helped us make walls and we were very pleased with ourselves and our mates were lining up to do things in this venue. The Sunday before the quake we had our Artists for save our water Hurunui Water Matters exhibition open there. We had orginally been going to have it at the Linwood Community Centre / Te Whare Roimata but this had been closed because of the September earthquake. It was empowering having our own exhibition space.

Alby McCathy, Sally Hope, Ben Woolcombe, Karen Gillies, Peter Langlands, Elsie Ellison, Edward Snowdon and I lost the work we were exhibiting which was meant to open at Crossroads Gallery Cheviot on the 16th March. We were exhibiting artwork about the Hurunui River and Lake Sumner area as we do not want Lake Sumner to look like Lake Monowai, raised 2.4 metres in 1920 and still ringed with dead trees. The Hurunui farmers’ water wish-list, proposing more intensive irrigation, could mean the destruction of natural environments that we love and want to remain as they are. Once you dam a wild river it is destroyed forever.

As the third floor fell into our floor Leslie Shands and Dolly Hope who was looking after the water show, escaped down the stairs which now had perspex in the overhead skylights so they were not showered with glass, and clambered over the rubble of the third floor on the footpath. The building inspector who had inspected our space after the first earthquake, said he would not mind being in this building if there was a quake. Unlike some of the modern buildings the stairs held evan though the roof fell in. A few days later Leslie told me of their escape and warned me we would not get our stuff back unlike the first quake. Eion Stevens whose studio was on the third floor lost over 50 paintings. Karen lost ten years of painting. I lost all my painting stuff and some paintings but I was lucky most of my art was at my place. I had left the building five minutes before and was flung to the the ground as the buildings around me in Manchester St collapsed.

At the memorial service they played a 14 minute video of the inner city and when 84 Lichfield St appeared I exclaimed that’s my studio. Later I tracked it down on U tube and captured a blurry still. When Prince William said out of ” love comes grief ‘I acknowledged my grief for the city and studio I loved and are no more. 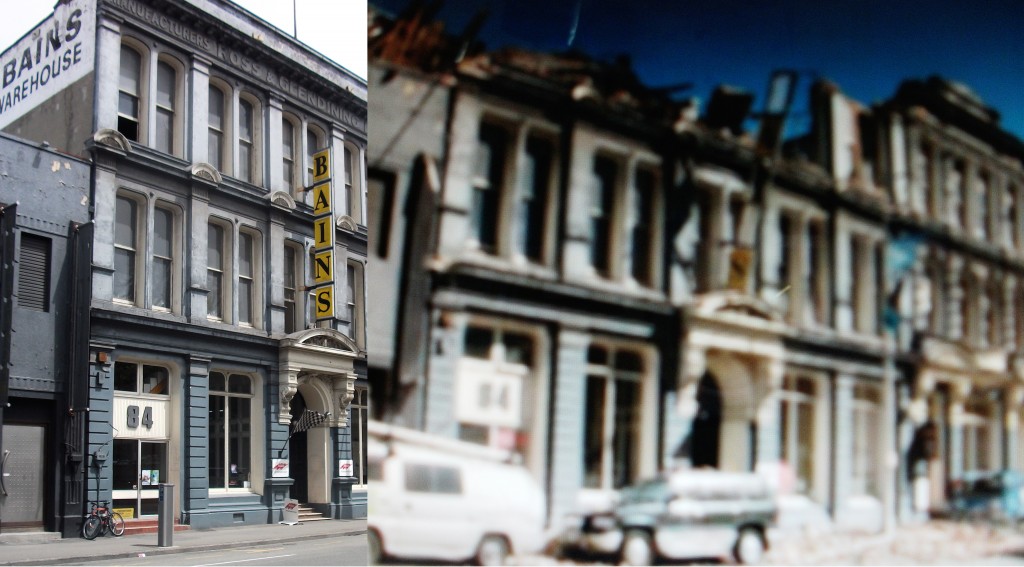 4 Responses to elegy for my studio