Kia ora
Just letting you know on tuesday I got my filbert brushes back. I went to help Rua Pick who had got a call as a result of registering for the Hamish Keith Lost Art Site and so we were assigned engineers and Civil Defence staff who were awesome. They got carried away helping us as you can see from this photo. This was not part of their work brief. We had been told not to expect them to carry stuff for us in our initial briefing where they told us we would go to gaol if we left the group and went sightseeing. When we got there the entrance to my studio at 84 Lichfield St was red stickered and a complete no go area which means no one is allowed in. 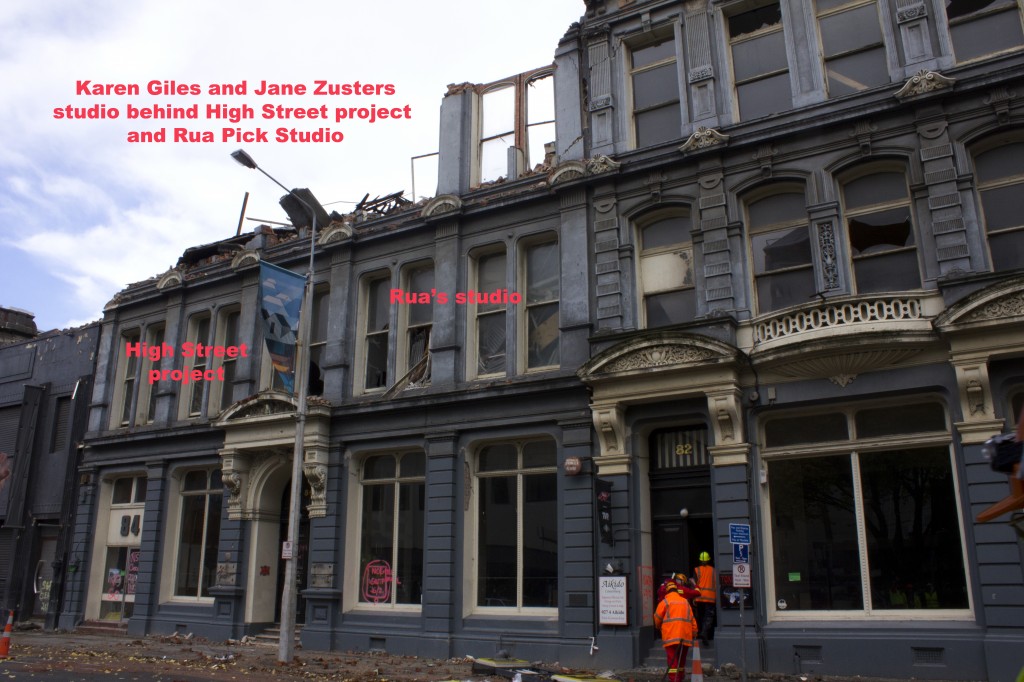 The whole of the top floor was sitting on our floor . Until the engineers had inspected we did not know the roof had not caved into my part of the building. Initially they said it was too dangerous to go into 82 Lichfield St, the entrance Rua’s studio. I burst into tears when they told us this and got a big hug from the guy you can see in the photo with the red hat and the canvas roll. Then they changed their minds and gave us 10 minutes. I got in through the back door so to speak through a hole in the wall. I was told by Civil Defence if I was too frightened not to go in but this never crossed my mind.
I was assigned two engineers and allowed to go in through the 82 Lichfield Entrance and enter my studio through Rua’s studio where part of the wall had fallen down. With help you can get out a lot of stuff in 10 minutes. My area of the studio was very badly water logged so I was really pleased to get my brushes, staple gun, canvas pliers, Peter Langland’s photos, Ben Woolcombe’s prints,heaps of Karen Giles sketch books and paintings and one sodden,crumpled canvas of mine as a souvenir.
We are so, so, so grateful we were able to retrieve any work – a miracle actually!